Other Projects - Yes To New 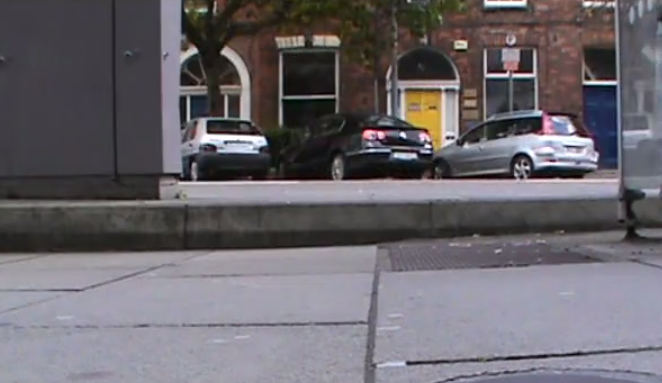 I really enjoy trying to come up with an idea for a film when you have a theme to follow. Back in the fall of 2014 I was googling film competitions in hope I would find a themed one. I came across the Nikon European Film Festival. They were doing a contest where you had to make a film under 2 minutes in length from a perspective. The perspective could be from anywhere.

I originally wanted to have the camera facing out from the eye level of a homeless person sitting on the ground. The camera would pan back and forth at people walking by and eventually a businessman would stop and have a conversation. When I told my girlfriend Eilish what I was planning she liked the concept but she suggested that I try and simplify. It was a good suggestion. I decided I would put the camera at eye level of a homeless person’s perspective from the ground but to keep the camera still. I wanted to just show legs and feet walking past and then something happen at the end.

It was a cool Saturday in October and Eilish and I grabbed the Sony handcam camera and got the bus into Cork city. We got off on the South Mall Road. We thought that that street would be perfect so we didn’t end up going too far. It was around noon and we had planned on spending the whole day filming it to get the different times of day. We both sat on steps of a building and sat next to the camera while it was running. We let the camera run for a couple of minutes. While sitting there I thought about how I would only be doing this for 2 minutes and then be going to sit down and have a meal and a drink. I couldn’t imagine sitting there and not knowing where to go or when your next meal will be.

After the meal we came back and set the camera in the same spot. We came and went throughout the day with grabbing coffees and drinks in between as well as dinner. We ended the night with going to see the film The Judge. After that there was darkness and we went back to the step. This was for the final shot. Somehow in that 10 minutes the weather went through four seasons. It was perfect to show the effect in the film.

After the film was submitted we had to wait a few months to hear if it would be shortlisted. I remember it was the morning after the Patriots beat the Seahawks in the Super Bowl so I was still buzzing and an email notification came up on my phone. When I opened the email it was a congratulations on Waiting getting shortlisted. Eilish and I hugged and jumped for joy. We were so excited that they liked our concept and film. The fact that it was recognized in a European contest was an added bonus.

Waiting didn’t win any prizes but for it to be picked in the top 50 of almost 400 films was a victory. I was so proud especially after looking through so many great, well shot films. I was most proud of the meaning behind the film and what it stood for. I hope you enjoy.

It’s that time of year again…the March on Film contest in Dublin had their awards the other night.  It takes me back to this time last year to a night that changed my life.  A night that has boosted my confidence.  Of course I’m talking about Frames winning Best Film at March on Film.

The ironic thing right now looking back is the film dealt with nostalgia.  It was an idea I had been wanting to do for a couple of years.  It’s based on Bridgie’s pub in Ballygarvan, County Cork.  A relation of mine owns the pub.  Being from the states and having a mother from Cork, we did many trips to Ireland.  In fact at least one a year.  My favorite part was going into the back pool room (setting of the film) and drinking coke, eating Taytos and shooting  pool with my cousins.  The basis of the film came from the fact that there were so many happy memories from that room.

As time has moved on and years have gone as expected we don’t have never ending summers to play pool  as we’ve all gone off in different directions. As a very nostalgic person, I’ve had difficulty with over the years.  If someone had given me the option to pick an age and stay at it forever I would’ve but alas I never got this option so making a film was the next best thing.

I remember telling the idea and concept to my buddy Clark when we were just chatting one night at a pub in Dublin.  Clark is a talented filmmaker and had brought me on board with projects in the past and had helped me with mine as well.  I knew when he really liked the idea we had something.  It wasn’t until around a year later that the idea came together.

I made a journey back up to Dublin for the day, as this stage I had relocated to Cork,  to meet up with someone about a documentary idea I had thrown their way.  I had a few hours to kill before meeting him so I reached out to Clark to have a coffee.  We met up and he said how he entered the March on Film contest with Marco Griffini ( a guy I knew and knew as a heck of a cinematographer).  They had entered but hadn’t come up with an idea.  I mentioned to Clark the chat we had the night in the pub about the pool room.  I could see the lightbulb go off !

The set was the pool room in Gleeson’s, Booterstown and the whole experience was a great pleasure especially working with such a talented group. Clark Wickstone (co-writer with myself, actor, director, editor), Mark Griffin (actor), Marco Griffini (cinematographer), Caiman Agnew (sound) and Claire Cassidy (make-up).  I enjoyed filming it so much that I couldnt wait to see the result.

Once we had gotten shortlisted for the final, I had a good feeling we would come out with something.  I really wanted that Best Film award as the team championships mean so much more.  The night came at Sugar Club and I felt on cloud nine when they announced Frames for Best Film.  I couldn’t get the smile off my face.  I feel like it’s still on my face because that has lead me to doing other projects.

I began doing vlogs this past September where I have to say yes to something new in each one.  It’s to get me out of more comfort zone and get other people to try new things.  I’ve still been trying to get Frames on various platforms like the RTE Shortscreen or the In Flight entertainment on airlines.  I am hoping that someday someone will say yes to putting it onto a platform or for someone to say yes to making it a feature film.  Until then, hope you enjoy the film.

Find out about my other projects